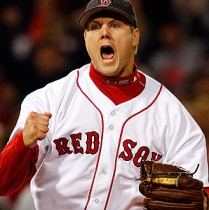 Jonathan Papelbon will be the Phillies’s closer for the next four years.  Concerns about the size and length of the contract aside, Papelbon’s arrival brings a larger cost to the City of Philadelphia.

So that’s an exaggeration, but it is a peer-reviewed non-exaggeration to say that he takes an infuriatingly long time between pitches.

So I did some math to answer this question: How much of our time will Papelbon waste over the next 4 years? I addressed this question by using the Fangraphs’s ‘pace’ statistic which tracks time per pitch.

END_OF_DOCUMENT_TOKEN_TO_BE_REPLACED

In looking up the names of old ballplayers, I stumbled upon a familiar name on the roster of the 1923 Philadelphia Phillies: 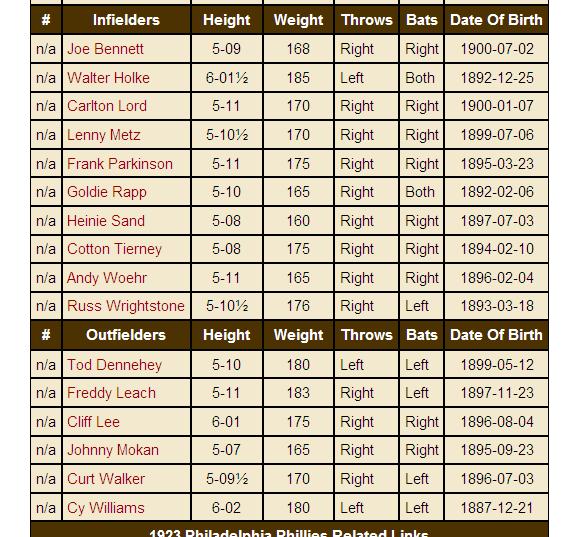 How interesting, I thought!  There was another Cliff Lee, playing outfield for the Phillies back in 1923.  My puzzlement continued when I saw that this Cliff Lee had also played for the Cleveland Indians, in 1925 and 1926.  So I checked up on this fellow on ESPN, which has a player archive that stretches back to the 1800s.  Behold what I found (click for larger image): 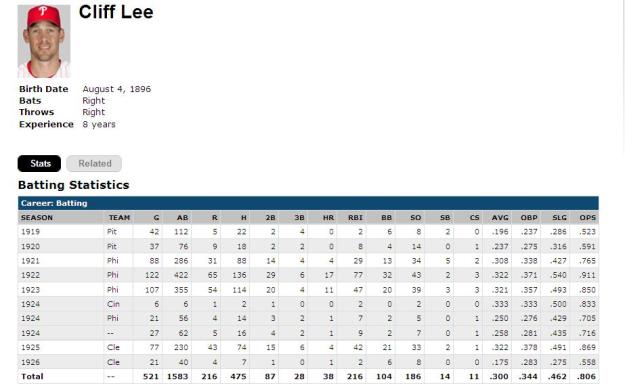 Nothing in this is touched up in any way by me

I could not take my eyes away from the player’s portrait!  This 1920’s Cliff Lee bore an eeeerie resemblance to the Cliff Lee we just signed to a massive contract.  Comparing the two photographs side-by-side reveals just how similar the two men look:

Note, dear reader, the similar smiles, and the similar proportion of neck width to jaw width.  They don’t wear their caps the same way, but perhaps that was a result of the differing styles of different eras.

Still, I cannot help but shake the notion that there is a baseball card somewhere, perhaps hidden in an attic in Benton, Arkansas.  The card is well preserved in a plastic sleeve.  Were you to hold it to your nose, you could just imagine the faintest smell of bubblegum dusted upon its surface.  The image on the front is of a man, framed in an oval above which are printed the words Pittsburgh Pirates.  The man in the oval looks very, very old.  The bat which once jutted purposefully from his shoulder has dropped to the ground, gripped at the knob by a veiny hand.  The uniform sags, the button-tied front falling straight down from neck line to belt buckle, as if the chest and stomach of the man have collapsed inward.  The old man’s wrinkled face betrays no hint of the athletic young man who should be gripping that stick of maple.  But the eyes, oh the eyes, they have lost none of their vigor, and they are a ballplayer’s eyes indeed.

And were you to turn over the card and examine its back, dear reader, you would see a curiosity indeed: a list of statistics, impossibly long, type minuscule in size.  At the top, batting numbers; farther down, pitching.  The man, or so the card claims, has played in over 70,000 baseball games.

And if you happen to be holding this strange card, gently, with the edges of its case between thumb and index finger, on an afternoon this upcoming early April, you will see the text suddenly, imperceptibly, shift, and grow smaller.  And at the bottom, smaller than a line of ants, a new line will suddenly appear.  2011.  Philadelphia.  1 Game.  1 Game Started.  7 innings pitched.  5 hits, 0 walks, 1 run, 6 strikeouts.   ERA of 1.28, WHIP of 0.71.  Record: 1-0.

The universe, and Ruben Amaro Jr., are more absurd than I gave them credit for.  Cliff Lee is going to sign with the Phillies for 5 years, $120 million.  I’m not even happy about it.  So many things I thought I knew about baseball have been proven wrong.  I can’t organize my thoughts into a tidy five-paragraph essay (sorry, 9th grade English teachers!) so here are many of them in bullet-point form. 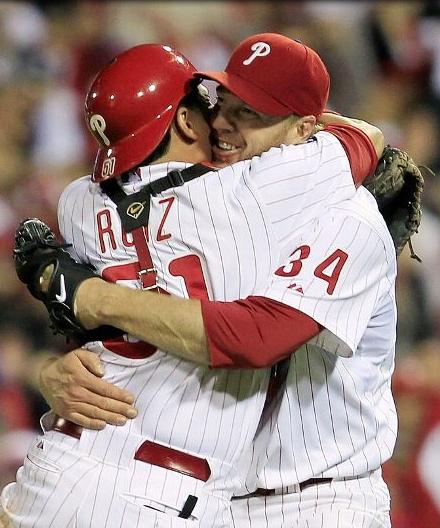 We (and Ruiz) will always have Halladay's no-hitter

If the Phillies want to get to the playoffs next year, I’d recommend investing in the bullpen.  The Mariners are the model to follow.  Sign a bunch of guys with good but erratic stuff, let them fight it out in spring training, and see who sticks.  Most relievers are only good for a couple years at best, so why spend money on them?  It’s not a coincidence that the teams with the best NL bullpens tend to make, and do well in, the playoffs: 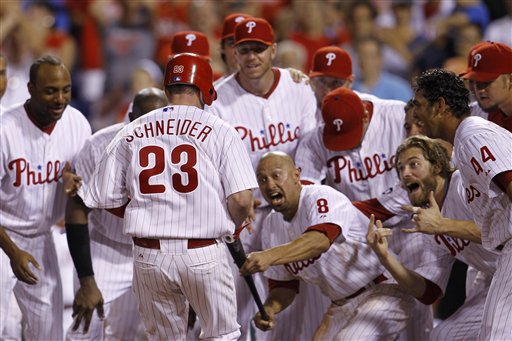 I am a free thinking, freedom-loving baseball fan unburdened by a moldering conscience or a capitalism fetish.  Thus, I root against the Yankees, particularly during the playoffs.

Living in Philadelphia these past four years has made me a Phillies fan (particularly with the Mariners not giving me much to write home about).  However, with the prospect of another Yankees-Phillies World Series upon us, I am forced to consider the possibility that the Phillies resemble the Evil Empire more than I would prefer to admit.  So let us examine the two likely starting playoff rosters for each team:

every player a former or deserving all-star at some point

[WAR numbers from Fangraphs.com.  The salary figures are in the millions.  The sparkle/shit index (SSI) is a carefully constructed metric weighing how much a golden retriever would root for that player in the playoffs.  Positive numbers indicate golden retriever support.]

I was surprised to see that the Yankees roster manages to overcome A-Rod’s massive -10 SSI and even out to golden retriever-neutral.  This is the time of year when you have to respect the hell out of Rivera for his post-season performances.  Gardner, Granderson and Swisher are all likeable guys worth cheering for.  This is also the time of year when you root against Jeter just to combat the noise of national baseball journalists humping his leg.

Now to the Phillies:

I’m relieved to see significant discrepancies between the Phillies and the Yankees in SSI and salary.  The Phillies also have the best story of the two teams, that of Roy Halladay finally making it to the playoffs.  So it’s clear which team is easier to root for (golden retrievers agree).

But how about each team’s path to the playoffs?  The Yankees roster is spearheaded by massive free agents Sabathia and Teixeira, plus A-Rod (the Haliburton of baseball players).  The Phillies are less free-agent heavy, but are absolutely banking on Halladay, Hamels and Oswalt to make it through October.  The Phillies used their farm system and financial resources to acquire Halladay and Oswalt from teams who could not afford them.  Very Yankee-like if you ask me.

So it seems we have two teams here whose financial resources have provided a few key players which separate them from the other strong teams in the league.  Neither team can boast the home-grown, DIY credentials of the Twins or the Rays.  But if roster construction and WAR do not make it clear which cheering section we should occupy this October, the SSI index provides us with an answer: 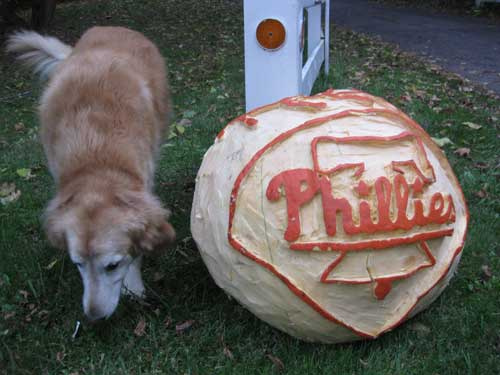 ESPN reports that Jayson Werth has hired Scott Boras as his agent.  I concede, Werth is a valuable player who will probably get a big contract somewhere this off-season, and probably not from the Phillies.

But hiring Boras a month before your big free agency is the baseball equivalent of the tramp stamp.  It’s tacky, lacks subtlety, and screams, “Hey boys, I’m on the market and looking for the highest bidder.  Artsy types need not apply.”

Teams employ the shift against Ryan Howard on the bet that he will pull the ball.  As David Ortiz showed back on April 23, 2006, bunting against the shift can be done for fun and profit.  Well, perhaps not profit.  The conservative line is that sluggers like Ortiz and Howard “aren’t paid to bunt.”

Going off the assumption that sluggers are paid to win games, we investigated whether WPA (win probability added) suggests that Ryan Howard should learn to bunt against the shift.  Conventional wisdom, and Charlie Manuel, would say that Howard should not bunt because of his potential to hit a home run.  Opponents’ use of the shift suggests that they think similarly.

To simplify things, we looked at Ryan Howard’s plate appearances with nobody on base (the time most likely to see the shift).

We took Howard’s career (through 8/4/10), bases-empty, average WPA for his home runs, singles, doubles, triples, walks and outs.  Then we calculated the probability that he does each of these things, based on his career rates of each result with nobody on base.  We multiplied the WPA for each event by the likelihood of each event, and added them together (typical expected value formula).

The result was the graph below:

WPA is more of a descriptive tool than a predictive one, but frankly, we were surprised by what we found.  The green line is the break even point.  In any bases-empty situation (the red line), Howard improves his WPA if he is successful in only 40% of his bunt attempts.  With no outs and the bases empty, the WPA of a 70% success-rate bunt is an astounding 20x the WPA of swinging away.  Considering the vast real estate available to Howard on the third base side of the diamond, and his well-known work ethic, it is not unreasonable to think that Howard could become a 70% bunter.

This, of course, will never happen for two reasons.  The first is that Charlie Manuel would never allow Howard to become a notorious bunter on his watch.  The second is that if Howard became one, teams would employ the shift less.  In this second scenario, however, Howard makes the defense pick their poison.  If they shift, he threatens bunt.  If they don’t shift, his chances of a single or double increase.  Howard is a team player, and his big, home-run-based contract is signed, sealed, and delivered.   The incentives for Howard to start bunting are there, and you know Citizens Bank Park (and Jimmy Rollins) would get a kick out of it.

Authors: this post and the research therein was written and conducted by Mike Lipsitz and Nicholas Mirra.  Statistics were obtained from fangraphs.com and baseball-reference.com.