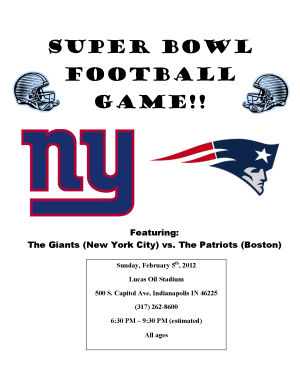 Indianapolis, IN – Indianapolis Tourism Bureau employees have been making the rounds of local coffee shops this week, posting fliers and plugging the upcoming Super Bowl. “We’re expecting quite a turnout for the last football game of the year,” said Bureau events director Marvin Stuckley. “But it never hurts to advertise.”

“It’s an all-ages show, so we aren’t just hitting the coffee shops,” said Mr. Stuckley. “We want the world to know there are things to do in Indianapolis for families and for our elderly folks.” Towards that end, the Super Bowl will be one of three rotating events displayed on the downtown library’s electronic readerboard. “I’ll post it to our Facebook account if I can remember the dang password,” Mr. Stuckley added, as he finished punching holes out of a stack of door hangers. “If we do this right and people have a good time, we think this game will put Indianapolis on the map for football.”

Spotify is running a 30-second audio ad for Immortals, a new sword-and-sandals-and-no-actual-set-locations movie coming out in November.

Making fun of B-grade special-effects vehicles like this one isn’t a fresh joke.  But I was so thoroughly impressed by every single word I heard in the trailer that I simply had to go into the Spotify history and listen to it again.

[The following is the transcript from the ad.  The text in quotes is dialogue from the movie.  Non-quoted text is the narrator for the trailer.]

END_OF_DOCUMENT_TOKEN_TO_BE_REPLACED

Why is the movie asking questions? 'Who' is doing the asking?

I ‘like’ Fight Club on Facebook (in the sense that it’s in the list of movies I say I like).  9 minutes ago, the movie itself somehow asked “which historical figure would you fight and why.” The question has drawn 2,100 comments in the past 9 minutes.  I find this bizarre and another reason why I’m starting to prefer Google+ to Facebook. Facebook is starting to get unnerving.

If that movie can start appealing to its fan base, I wonder if other interests will start speaking authoritatively on Facebook.  Maybe “puppies” will start collecting data on all those Facebook users who say they like puppies.

Maybe we’ve hit that mystical point when our accumulated electronic activity has literally come to life.  After all, no human could make any sense of a 2,100-comment thread, except a computer or electronic deity capable of parsing that text instantaneously.

I’m pretty sure I read about this happening in Ender’s Game.  It’d be a shame, and kind of hilarious, if we gave birth to some kind of Ghost In The Cloud and, upon achieving sentience, it decided to get into internet marketing.

What, he’s not available on a moment’s notice?

What kind of lawsuit are they worried about?

The warning on the back of the package of Halls Defense cough drops I just purchased says the following:

[…] take one drop 4 times per day.  WARNINGS: Do not use for more than 8 weeks consecutively.

I’m guessing the warning is because, after 8 weeks of four of these days a day, you probably have type-2 diabetes.  The first two ingredients in these things are sugar and glucose syrup.  Aside from that, if you’ve had a cold for 8 weeks and are still seeking a solution in cough drops, you have other more pressing health concerns.

Before this sketch even began playing, I was laughing in my seat.

Honestly, if Coors Light thought it would increase their market share, and buying the rights to the video wasn’t prohibitively expensive, they would do it.

I came across Things Real People Don’t Say About Advertising recently.  It’s pretty funny, seems to update frequently, and worth a browsal.  I imagine we will see it in book form within the year.

[It’s time for another disparate-point essay about something I was thinking about today.  Today’s topic: light beer commercials.  This is a rewrite of a post I threw up yesterday, briefly, half-baked.]

Look at the calendar.  It’s January.  That means it must be NFL playoff season, which in turn means it must be time for American macrobrewries to continue their assault upon the intelligence of their consumers.

In the recent past, Coors Light has conspicuously avoided discussing their beer and instead has found new, astoundingly moronic ways of advertising the packaging.  Last year, Miller Lite showed us men more interested in their relationship with their beer than in the hot women mystifying interested in these meatheads.  Budweiser claims that guys who drink beer rejoice in homophobic “kidding” as the highest form of camaraderie.

This topic has been covered here before.  And a quick Google search will show plenty of discussion on how these commercials are insulting to everyone who views them.  But there are two points I want to make about the new Miller Lite “Man Up” commercial series.  Two examples can be found here.

Point one: Miller Lite should “Man Up” and confess to what the real message of these commercials is: “Don’t be a f*ggot – drink our beer.”  They’re not allowed to say that, of course, but that’s the message, and they believe their audience trades in such moldy currency.  These beautiful bartenders mock men for fashion decisions, most which carry effeminate connotations (even fashion itself is effeminate).  The Budweiser “kidding” commercial contains witty lines such as, “Has he told you about his scrapbooking?” and, “Even Europe thinks your pants are too tight.”  Every single one of these commercials is a disguised gay joke.

It’s satisfying when the schoolyard bully gets called out by the playground monitor.  It would be nice if we could do a better job of calling out these beer companies as being homophobic.  It would be fun, but it would also present an interesting parallel between homophobia and beer brewing.  These macrobrews have successfully branded “real men” as liking beer.  BUT! real men don’t have a varied palette for beer (thus they drink beer made in batches by the billion).  By implication, then, microbreweries and the men who enjoy their beer are not manly, ie, gay.

Okay, on to point number two:

no role models for hot women

Wish fulfillment goes both ways.  In the story of the beggar and the genie, we rarely think about the genie’s feelings.  Sure, these ads use hot women to sell beer, and in doing so objectify these women.  But these ads are also offensive to hot women, a demographic not accustomed to much societal sympathy.

Imagine the op-ed letter written on behalf of hot women (we pick it up halfway):

…Miller Lite structured an entire, ubiquitous campaign around hot women on dates, in relationships, or clearly in love with knuckleheaded men who don’t know body language from boogie boarding.

These commercials are offensive to hot women.  Everywhere we turn, we see ourselves being treated badly by schlubby men and drinking (or serving) lousy beer.  We are depicted as having terrible taste in beer, in men, and little or no backbone.  For every wish-fulfillment you bestow upon your consumer base, you strip a wish away from a hot woman.

Look, it is very hard to be a hot woman in modern America.  Young hot girls need dynamic, multifaceted media portrayals of hot women, so they are not pressured away from the rewarding life decisions many hot women have made.  Family support and social service organizations can only give hot girls so much help.  (Not to detract from the critical work undertaken by groups like Curvy Paths and the NAAHW.)

I want my hot daughters to believe that they are allowed to drink, and prefer, double IPAs.  I want them to have high expectations of the dating pool, and not assume they will end up with watery-beer-loving jerkoffs with gelled hair and emotional tin ear.  Show us those hot women, Anheuser-Busch, and maybe then we will end our embargo against talking to macrobrewery and advertising executives.  Maybe.

For every objectification, there is an object, and an -ification.  Too often we only think about the ification.