I saw the second to last game ever at Shea Stadium, where Johan Santana pitched a complete game in the drizzle.  Thanks to that ticket purchase, which had everything to do with Shea Stadium and nothing to do with my affinity for the Mets, this weekend I received a glossy flier advertising the 2010 Mets season.  The slogan? 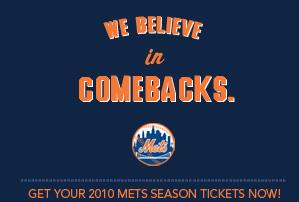 It's only March, but the Mets are already losing, apparently.

I’m not one to judge, rooting as I do for a team whose motto last season sounded like the slogan of a losing political candidate (“A New Day, A New Way” – Seattle Mariners 2009).  But as my housemate pointed out, “Boy, the Mets seem to be admitting that they’re already losing.”

Should be a great season.